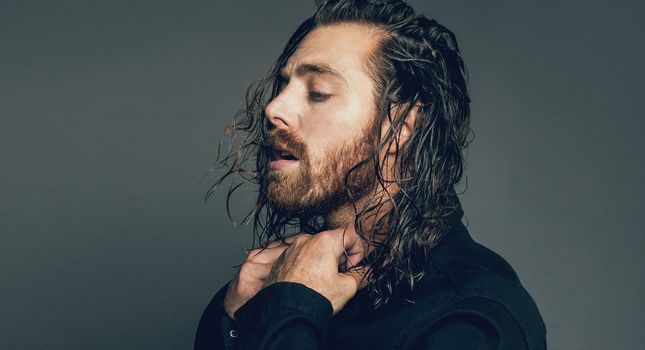 It’s been a long, unexpected, and literally winding journey that brought Jonathan Roy to Life Distortions.

Having grown up between Colorado and Montreal, it wasn't unusual for Jonathan to start to feel restless, but a few years ago, the weight became more pressing. He had been making music for years but knew something was missing. So, just like a modern day Beat poet, Jonathan decided to hit the road.

On a quest for self-discovery with no set physical destination in mind, Jonathan headed right across the US in a 1989 Ford Ultra RV. “When I left, everything fit in the RV,” he said. “I sold everything and I realized all these things didn’t make me happy … to get happiness, you have to go and grab it within.” He ultimately ended up in Los Angeles, living along the PCH with a view of the ocean for two years, and that’s where the internal shifts really started to unfold.

One of the earliest songs Jonathan wrote in this period of exploration was the emotionally-charged “Keeping Me Alive,” the first sign he was moving in a whole new direction. Light-years removed from the pop-infused Mr. Optimist Blues, “Keeping Me Alive” debuted on his 2021 EP My Lullaby and quickly reached over 90 million streams on YouTube. The immediate success of the track served as proof for Jonathan that, even in this prefab world we live in, nothing resonates like real authentic art.

“I connect way more with what I’m doing now because it’s coming straight from my fucking heart and not from anywhere else,” he says. “I went all out my way. It’s scary as fuck but it felt really good. I felt that if I failed it would be 100% my fault and I wouldn’t be able to blame it on anyone else. It was a thrill.”

In retrospect, Jonathan’s defiance of convention in pursuit of his art is nothing new. Growing up, Jonathan had originally thought going down his own road meant playing professional hockey just like his father, the legendary NHL netminder Patrick Roy. Primed for the Quebec Major Junior Hockey League, it seemed all but destiny Jonathan would carry on “the family business” until one day, after Patrick urged his son to trade the ups and downs of hockey for the certainty of school, Jonathan shared his real passion was music. In a leap of faith, he hung up his skates and got to work.

Jonathan’s debut album What I’ve Become was released in 2009, followed soon after by 2010’s Found My Way and his first French-language record, La Route, in 2011. Next came a role in the hit franco stage musical Don Juan. With three albums and one stage gig under his belt, Jonathan signed with Corey Hart’s Siena Records for his 2017 record, Mr. Optimist Blues, which topped charts in Canada powered by the infectious single “Daniella Denmark.”

Though grateful for the success, Jonathan craved a less polished sound – and that’s when a life-changing idea hit. In a DIY burst of inspiration, Jonathan shot a series of videos playing stripped-down versions of new songs including “Keeping Me Alive.” The music absolutely took off online, and Jonathan now has over 400,000 YouTube subscribers, and over 50 million streams on Spotify alone.

Following the same commitment to raw authenticity that fueled 2021’s My Lullaby, Jonathan has further honed his singular sound in the upcoming Life Distortions, the fullest expression yet of Jonathan’s evolution as both a person and artist. While still featuring the strong hooks and melodies that made his music so popular in the early years of his career, the sonic terrain of this album is truer to Jonathan than anything else he’s done to date. Emblematic of the fresh new sound is his latest single, “Stay in Bed and F*** (While the World Burns),” a vintage Motown-like tune with a contemporary R’n’B backbeat that adds edge to his soulful vocals.

Jonathan tapped Juno award-winning musician/producer Brian Howes (Hinder, Skillet, Nickelback) to help produce the EP, along with Marc Beland, the drummer/percussionist in Jonathan’s band and one of his go-to creative partners for years now. Other producers on the Life Distortions include Tee (Drake, Alessia Cara), Stevie Aiello (Thirty Seconds to Mars, Of Mice & Men), Drew Polovick (Oston, Friday Pilots Club), and Heavy (lovelytheband, Dirty Heads). Surrounding himself with collaborators he trusts, Jonathan is following his own vision and eager for fans to experience what’s ahead.

“I think people will connect with what’s real,” says Jonathan. “People have bullshit detectors. I’m playing what I like in the songs. I’m trying to grab all the things I like from bands and people that I admire and I’m trying to put it in my soup, in my writing and melodies. I feel like I’m an old-school cat creating this weird pop alternative music and I love it.”

Life Distortions is slated for release on February 3, 2023.